Julia heard the mouse-headed man banging on the door as she walked through the kitchen. “We have you surrounded. Bring out the kid and we won’t blow all your heads off.”

When she entered the garage, Yuli–wonderful Yuli–was already standing at the ready.

“Go around and get them from the other side,” she instructed.

Julia smiled. “I’ll be fine. We planned for this- and it’ll work better if we scare as much shit outta them as possible.” She had felt so prepared for an attack, so confident in her ability to fight. But all of that had been meetings and daydreams. Up until now, she hadn’t been fully convinced that it would happen for real.

She looked at Silver, primed and bristling. Then she looked back at Yuli and shrugged. “We don’t have a choice.” She clicked the garage door opener and light began to flood the room.

They nodded at each-other before Yuli left. When the door finished rising Julia had a rifle pointed right at her. The pheasant-woman was standing in the driveway, and her partner was leaning over the porch railing. 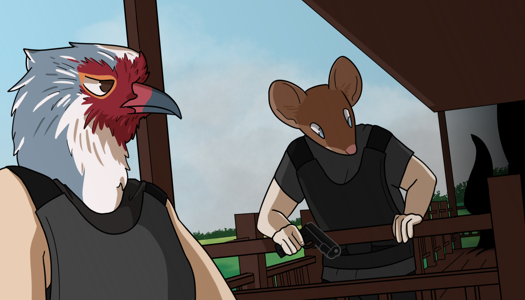 “Ok, we give up, we surrender,” she steeled herself and walked outside. The enemies hadn’t noticed Yuli leave- thank god. It almost made her smile. She knew the pheasant-woman must have seen a shadow, a trick of the light, and then it was gone faster than she could register and no longer important. 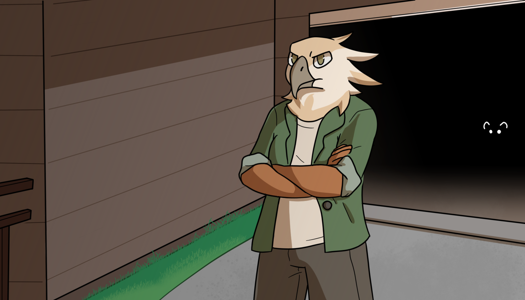 “Hands up,” the woman motioned with her weapon and Julia complied.

“Please, I’m not armed,” she pleaded, and when the pair of gunmen seemed convinced she added: “Now.” It was a prickle on the backs of their necks that made her enemies realize something was behind them.

Hey guys, I'm back in VA :-) I messed wth the navigation and added analytics too, hopefully things look a little less cluttered. I see a lot of people viewing the site on their phones! So at some point I'll try to make the site look better on mobile.