It prefers to roost atop the World Tree and will do so for a thousand years at a time. It sleeps more than any other bird known, only taking flight and dispersing feathers for a few decades before returning to its nest. This rarity is another factor that makes it a tempting prize, but through its impressive age it has become adept at concealing itself. Many men have left in search of the grove where the World Tree grows, but none have ever found it. Allegedly only one of its fledglings1 is capable of such a feat. 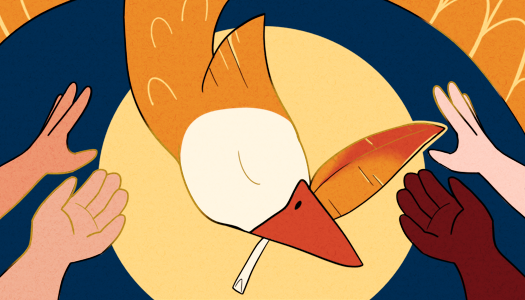 To call the Firebird a type of fae would be erroneous. Those who have been visited by it are not attacked or stolen. They are transformed. Fledglings are special people, for the Firebird has made the deep desires in their hearts come true. It’s been reported that, once the bird is ready to return to its nest, its fledglings gather before it in reverence. Although this may be further embellishment, it starkly contrasts the relationship that humans have with fae.

The last sighting of the Firebird was 130 years ago in Thebais. If it truly exists, then it will not awaken again for centuries- but there is the potential for great change to come to the world when it does.

Footnotes:
1. The word “fledgling” to describe those who have obtained Firebird feathers is an invention by the late Dr. Ivan Morevna (Morevna, 1994.) It was included in this translation in order to remain consistent with modern publications concerning the Firebird.